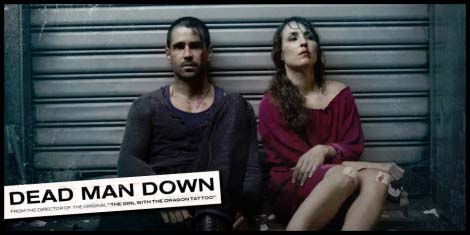 Director Niels Arden Oplev (The Girl with the Dragon Tattoo) hits American screens with his debut Dead Man Down.  Starring Colin Farrell as Victor, Noomi Rapace as Beatrice, and Terrence Howard as Alphonse Hoyt, Dead Man Down is a languid look at the human desire to seek revenge. 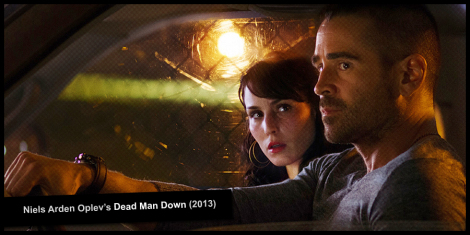 After his daughter and wife are killed by a local gang looking to push the residents of their apartment building out, Victor (Farrell) – an ex-Hungarian soldier turned engineer – concocts an elaborate scheme to make the men responsible pay.  All of them.

One night, while he carries out one of the many revenge killings in the film, a tenant across from his apartment, Beatrice (Rapace), witnesses the act.

Herself a victim of a senseless crime, having been struck by a drunk driver and her face permanently disfigured, Beatrice uses a video of the murder as leverage.  If Victor agrees to kill the man responsible for her injuries, she won’t report the murder to the police, leaving Victor free to continue his own vengeful quest.  The two become uneasy allies in their mutually grim endeavors.  Eventually, their twisted little partnership turns romantic.

In what is mostly a satisfying crime drama with strong outings from Farrell and Rapace, Dead Man Down is a relatively boilerplate revenge venture.  Farrell’s performance is subdued with a quiet poise more befitting the character than Farrell’s typical style.  It’s this quietness that helps sell an otherwise flat Victor.  Rapace does her best to create a multi-layered character in the visage of the fragile and complex Beatrice.

Director Oplev takes plenty of time to develop both characters, including a well-paced set up for the moral arguments behind the motivations of each. A wounded widow who has also lost his child, according to the ethos of Dead Man Down, has absolutely every right to seek revenge.  But what about Beatrice, who is still living and breathing despite chronic pain due to the reconstruction of her face? 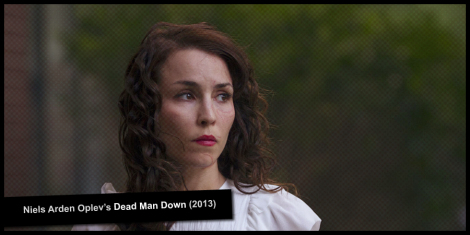 Does Beatrice  have the “right” to want the man responsible for her injuries dead?  I mean, yes, she’s in pain and she’s permanently scarred, but even a disfigured Rapace manages to be beautiful.  It’s a tough sell and a dodgy line to skirt, after all Beatrice’s beauty comes from within and it isn’t until she reveals her vengeful intentions that she loses that beauty; becoming as ruthless and hard as Victor.  That the chronic pain the character suffers is underplayed only helps to feed into the rather superficial, existing body issues most women wrestle with.  Is that enough to kill a man?

I suppose if we were in a Quentin Tarantino film we wouldn’t be having this discussion.  For Tarantino, revenge is a kind of sport and getting some is everyone’s right.  But, then again, I’d like to think Tarantino wouldn’t have so completely botched the end of Dead Man Down to this extent.  To spend 90+ minutes carefully constructing this elaborate moral framework only to let it all go to Hell in the final moments is a disappointment in what is, otherwise, a fairly decent film.

I’m still scratching my head over it.  You will be, too.