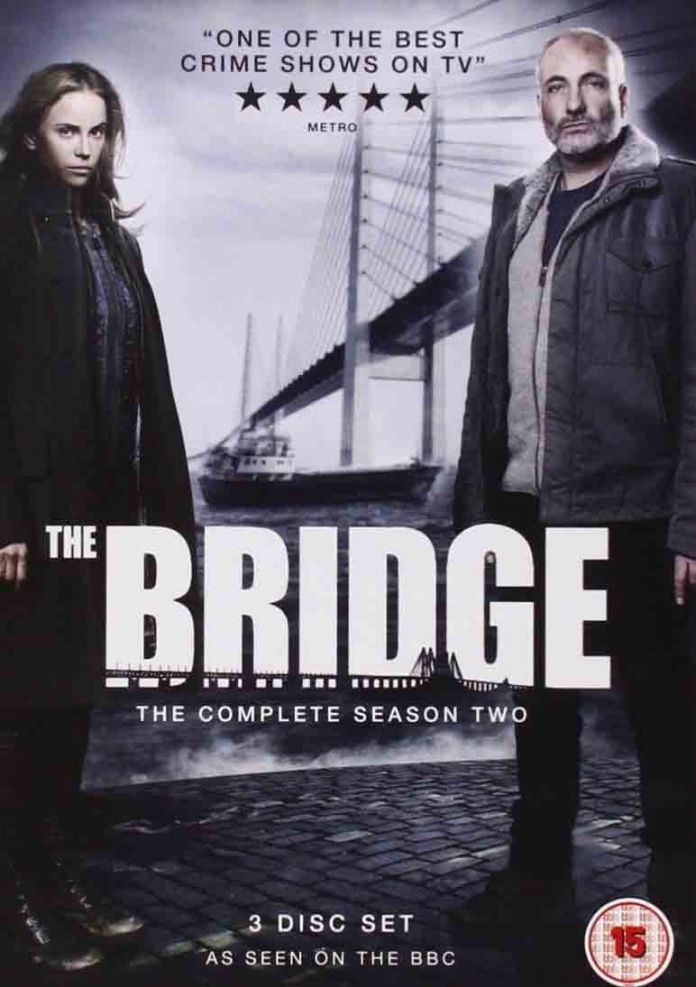 With The Killing and Borgen now consigned to the immortality of DVD boxsets naysayers might have been tempted to inaccurately predict that the Scandinavian TV phenomenon had peaked. From Stieg Larsson through to the closing moments of our window in Birgitte Nyborg’s personal life and political career, Danish and Swedish culture has been covertly invading our high streets and TV screens. Retail outlets now routinely stock Faroese inspired sweaters to customers who may be unaware of their precise cultural significance and the relatively recent television series Broadchurch has demonstrated that creative professionals are studiously paying attention to how their Nordic counterparts craft quality popular drama.

High turnout to the recent Nordicana event and consistently impressive viewing figures for The Bridge‘s second season is testament that interest in all things Danish and Swedish remains buoyant. Fans will take additional comfort in the knowledge that not only is BBC Four committed to maintaining its now traditional Saturday foreign language slot throughout 2014, it will soon be complemented by programming from More4 and Sky Arts who have purchased the promising Mammon and The Legacy.

Once TV schedules were a barren wasteland, devoid of interesting programming from Europe, now the broadcast landscape has been energized by supreme shows from Europe characterised by complex storytelling, exemplary acting, and production values which frequently outclass any dramas currently being produced within the Anglosphere. Proving that aficionados of subtitled series are being rewarded with a golden age of exemplary titles and visible support from both BBC and Arrow Films, the pain of saying farewell to Borgen was soothed by unleashing the peerless second season of The Bridge onto a viewing public ill prepared for the emotional turbulence they would experience over the course of five weeks. 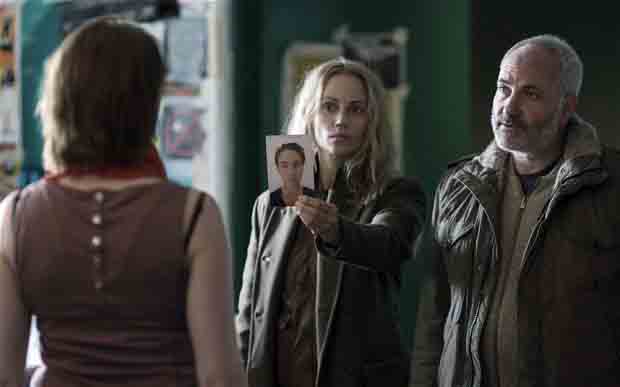 As actor, presenter, screenwriter, and crime novelist, Hans Rosenfeldt has worked on, or been responsible for, some of the most intriguing series, films, and books to have appeared in Sweden over the last decade. No stranger to crime fiction, in partnership with Michael Hjorth he co-authored three Sebastian Bergman novels and scripted the Rolf Lassgård starring TV adaptation. Asked to create the first Danish-Swedish drama co-production Rosenfeldt pitched the highly original idea of placing a bi-sected corpse directly at the mid point of the Øresund Bridge, ensuring that police forces from neighbouring countries must co-operate in the investigation. The inception may pre-date The Killing, it took six years before Rosenfeldt’s ideas could be brought to screen and in that he time he honed the overall story arc ensuring that all subplots were integrated into the primary investigation with the right degree of poignancy.

A relatively hands off showrunner, at least in British terms, Rosenfeldt views dailies but doesn’t set foot on set, preferring not to inhibit the director’s freedom. Creative decisions about the overall tone of an episode and significance of specific scenes in terms of the overarching plot are worked out during production meetings which take place in the days and weeks before cameras roll on Saga and Martin’s investigation.

The hard work and determination displayed by Rosenfeldt and his core creative team, both in front and behind the lens, was justly recompensed with the news that the first season had been exported to one hundred and seventy four countries. Additionally, several remakes of varying quality were produced including Fox’s US-Mexican adaptation, and Sky Atlantic’s Anglo-French co-production The Tunnel. 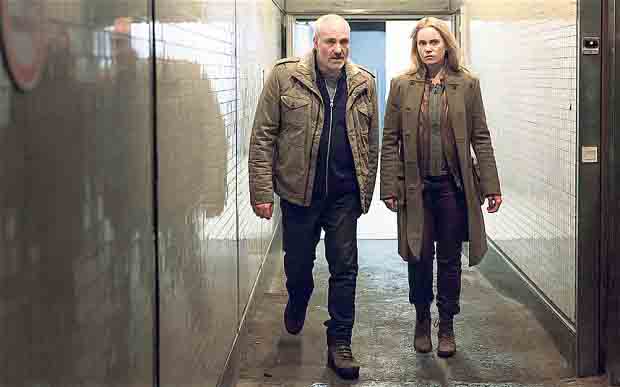 After a hair-raising finale to the first season, fans might have had reasonable cause for concern about the possibility of any new instalments diluting the impact of such an emotionally potent denouement. With Martin Rohde (Kim Bodnia) trapped by the near insanity of grief and guilt the series could have ended with his primal screams leaving viewers to conclude he would be forever-more be held prisoner within a personal hell without any possibility of salvation or redemption. The curtain was brought down on the show with such honest writing and depth laden performances a second series seemed inconceivable. Flying in the face of the law of diminishing returns, The Bridge‘s sophomore outing is an ingenious sequel which honours the previous batch of episodes before going on to trounce them and become a strong contender for finest Nordic drama to air on British TV screens since BBC Four opened up its schedules to European programming.

Highly accomplished acting and subtle plotting have delivered an ambitious series that accomplishes the near impossible trick of simultaneously telling a high concept story and an intense emotional tale.

Practically demanding a second viewing to spot the precise moments where specific incidents were first seeded, The Bridge delivers a complex narrative rich with subtext. Closer inspection reveals each line of dialogue is laden with additional layers of meaning, the significance of which is only fully revealed after watching the intensely charged climax. Offering no wastage, each moment of screen time is filled with intricately constructed character moments that riff on the season’s thematic subtext of unintended consequences.

Central to The Bridge‘s success is the relationship dynamic between Martin Rohde (Kim Bodnia) and Saga Norén (Sofia Helin), Playing with, and reversing, gender stereotypes an emotionally impulsive officer is partnered with a logician who sees social phenomena in terms of precise patterns.

In the thirteen months since events on the Øresund Bridge the only contact between Saga and Martin was at August’s funeral. Desk bound whilst he undergoes a therapy programme, Martin is still grieving for his son. Separated from his wife Mette (Puk Scharbau) and visibly tortured by feelings of remorse his colleagues treat him with kid gloves never expecting a return to active duty. Saga Norén is in charge of the investigating why a seemingly unmanned tanker piloted on a direct collision course with the Øresund Bridge. The mystery deepens when she discovers five youths chained up below the deck. Specifically requesting to be partnered once again with Martin, the pair reunite and try to deal with the consequences of what happened thirteen months ago whilst trying to solve the mystery.

Now a shadow of his former self, Martin is suffering from Post Traumatic Stress Disorder. Living in hope that he can reconnect with his family and silence the demons haunting his mind the opportunity to work with Saga is initially seen as a therapeutic exercise albeit one with considerable risks. Being partnered with the person who stopped him from killing Jens Hansen (Lars Simonsen) is fraught with dangers as the risk of confronting the past too soon, and without adequate medical supervision, has the potential to undo the recovery process and revert Martin to the state we saw him in at the closing moments of the first season.

Despite relatively minimal research, the producers were contacted by a Swedish aspergers charity that was very keen to praise the series’ representation of this form of autism. It is never explicitly stated within the narrative that Saga has this condition, but nonetheless this has become the most favoured diagnosis by fans and the popular press. Cast in the mould of a female Sherlock Holmes, Saga has a brilliant analytical mind coupled with an inability to break official regulations in the course of work.

The multifaceted script is replete with traps, shocks, reversals, and resets, the beauty of its construction becomes apparent after viewing the final episode. Playing games with the viewer, Rosenfeldt takes the viewer down seemingly blind alleys only to later reveal that the discarded information plays a vital part in the resolution. Emotional character arcs ground the series, preventing it from descending into an elongated logic game and assuring that the audience is able to enjoy the experiences of continually being thwarted in their attempts to double guess what links the disparate threats whilst becoming enthralled with the poignant voyage Martin and Saga take together and as individuals.

Trying to ascertain how five people listed as missing appear to be prisoners on a cargo ship opens up a panoply of enigmas and hazards. In reprising their professional relationship the mismatched pair of detectives inadvertently set in motion a chain of events that will take a sledgehammer to their friendship.

Despite being incarcerated within a maximum security prison in solitary confinement, Jens continues to make his presence felt. A force of destruction who thrives upon control and manipulation, he never expected to survive his confrontation with Martin at the end of the first season. Alone and dejected he feels impotent and seizes the opportunity to regain dominance when Martin asks to meet as part of a therapeutic exercise. Rejecting what appears to be an offer of redemption he remains an ever present opponent on the other side of the table.

Overflowing with ostensibly disconnected subplots that neatly dovetail as the series progresses. Mystification is continually augmented with the introduction of each new character, however as every scene and line of dialogue has been deliberately positioned to achieve a specific effect in terms of the narrative and the viewer’s enjoyment nothing has been left to chance by the writer, watching is initially akin to trying to piece together a jigsaw without a picture on the box for reference. Once the finale has been absorbed, the urge to immediately re-watch the series from beginning to end and savour the totality of a dense narrative with the benefit of enhanced knowledge is so strong it will take herculean powers of mental strength to resist.

A rusty ship drifting astray is the first in a series of puzzles that rapidly expands into a series of mysteries and tragedies involving poisoned food, eco terrorism, murder, industrial malpractice, and a threat to contaminate an entire EU conference with a virulent bacteria. Gathering clues whilst dealing with conflicting personal circumstances and a corrupted crime scene report, Saga and Martin race against the clock to discover who is behind the killings and prevent a disaster that could engulf the entire continent.

Wagnerian in scope, the second series of The Bridge delves into the darker moments of Saga and Martin’s psyches with contrasting outcomes. Whereas Saga is finally able to come to terms with a personal tragedy she has kept secret for many years Martin falls from grace and in doing so becomes a twisted reflection of Jens.

The Bridge is available on DVD and Blu-ray from Amazon: