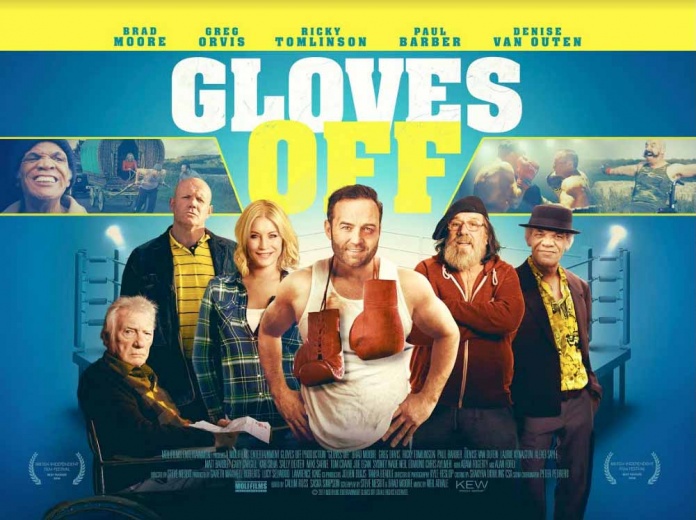 UK, London: Thursday 14th February, MoliFilms Entertainment Ltd are thrilled to announce that GLOVES OFF will be shown on Sky Cinema from 24th February and be available for audiences across the US and Japan on Hulu from April.

After a successful UK red carpet charity premiere in Leicester Square in support of ‘Boxing Futures’ and subsequent release On Demand and DVD, GLOVES OFF is heading across the pond and further to entertain audiences in the US and Japan with Hulu. While in Britain the film is coming even closer to home with Sky Cinema, ready to entertain families across the UK with some Britain’s favourite stars including: Ricky Tomlinson (The Royle Family), Paul Barber (The Full Monty), Alexei Sayle (The Young Ones), Denise Van Outen (Keith Lemon: The Movie) and Brad Moore (North v South).

GLOVES OFF represents the spirit of British independent film while embodying lessons of family, friendship and determination, as well as being a comedy that tickles funny bones on any continent. The film was recently nominated for a whopping nine times at this year’s National Film Awards, including for: Best British Film, Best Director and Best Actor (Brad Moore).

Directed by Steven Nesbit, after the sudden passing of Doug’s (Brad Moore) trainer, he inherits a debt-ridden gym filled with a mixed bag of crazy would-be boxers (Ricky Tomlinson, Paul Barber, Alexei Sayle). He’s now set with the task of raising £50,000 or face losing the gym to a group of Pilates obsessed stock brokers. When the chance to win £100,000 in a winner-take-all fight, Doug must train a gypsy woman’s brother to take on the ‘King of the Gypsies’ or lose everything.

Winner of Best Feature Film at the British Independent Film Festival (BIFF) 2018, GLOVES OFF is currently available in the UK, on Google Play, YouTube & iTunes and you can pick up the DVD at HMV or Amazon.

Director, Steve Nesbit – “We were so fortunate to have such a warm ensemble of cast. We wanted to create an atmosphere of belonging among a rich and unlikely diversity of characters and they afforded us that. That sense of community, friendship, action and humour has come together and given a film that is just fun to watch and watch again.”

Lead Actor & Co-Writer, Brad Moore – “GLOVES OFF is a piece of entertainment but it also represents to me what people can achieve when they pull together and pride kicks in.”