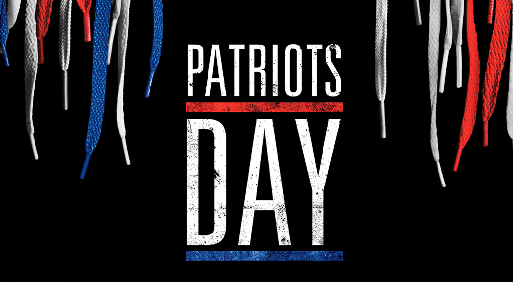 It might not have been as world changing as the attacks on the World Wide Trade Centre in New York but the Boston Marathon bombing in 2013 will also be remember forever. Director Peter Berg (Deepwater Horizon, Battleship) decided to honour the victim of that marathon in the noblest way: By making a gripping and dramatic but not over dramatic movie and by making sure the victims will never be forgotten.The film shows lots of respect for not only the diseased but also for the survivors.

After Lone Survivor and Deepwater Horizon, Berg decided to work again with Mark Wahlberg (Scooter, The Fighter), who plays Sergeant Tommy Saunders from the Boston Police department. During that terrible day, Saunders has been stationed at the finish line. He had injured his knee a few days prior to the event and asked his wife (Michelle Monaghan Mission: Impossible: Ghost Protocol, True Detective ) to bring a knee brace to his location. As she is is on route, two bombers decided to turn the wonderful day into a nightmare.

Two explosions occur one directly after the other. What follows is mayhem. Wounded people are being dragged away, ambulances are driven back and forth while some of the runners are still crossing the finish line without knowing what just happened. But at the same time we already see courage and even hope from both the victims and the entire Boston Police Department. While the victims are being taken care of, Saunders and his team are already doing everything they can to catch who’s responsible for the horror. No stone is left unturned, no resource is left unused with the FBI joining the investigation but the investigation doesn’t really succeed. Until they re-create the crime scene…

If you followed the news during and after the terrible events of the 15th of April 2013, then you know how Patriot’s Day is going to end because the film is based on those real events. Berg’s movie is still a typical Hollywood movie, which involves putting his ideas sometimes in front of the reality, but he still managed to accurately capture most of the events.

The film’s excellent casting adds much with Mark Wahlberg delivering a rational bad ass cop but at the same time also a cop who is led by his emotions. Less emotional but even more rational is Special FBI Agent Richard DesLauriers, perfectly portrayed by Kevin Bacon (Black Mass, X-Men: First Class). I would have loved to have seen a little bit more of JK Simmons’ Sergeant Jeffrey Pugliese because Simmons (La La Land, The Accountant) definitely knows how to deliver.

So is this movie worth watching? Yes it is. The fast past tempo of the movie, the talented actors and the still very accurate topic make from Patriots Day a gripping and captivating honour for those who suffered from the Boston Bombings in any way. Sometimes the story deviates from the real life events and the characters might miss a little bit of depth but don’t let that stop you going to watch Patriot’s Day. Especially when you had a bad day or when you were “busy busy busy” at work. You’ll instantly see what a real bad day looks like.